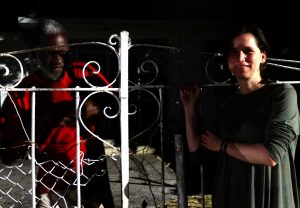 When, in March 2018, we gave a donation of 7.000,- JA $ (around 50,- €) to Earl “Chinna” Smith for his Inna Di Yaad community, he called a man asking if he knew where Junior Byles lives. The man affirmed, and Chinna told him to take us there and give him the money, as he’d urgently need it. We went there and met Junior Byles sitting on his Veranda in the dark.

He came up to the gate and the driver told him about our mission. When we handed him the donation, little as it was, he pressed it to his chest and laid down on the floor, praising Jah and us. It was a very touching moment. Junior Byles is in bad health and is living with his old father (which must be in his late 80ies / early 90ies). He doesn’t have any income, and a few close relatives and the Inna Di Yard team are the only ones who check on him regularly. Watch this INTERVIEW in order to learn more about his current state. Read his full biography HERE at Trojan Records.

In order to provide Junior Byles, who has created beautiful songs such as Fade Away or Curly Locks, with funds that his musical works have entitled him to, we need your help! Make a donation to Adabu Foundation e.V., IBAN: DE14 8306 5408 0004 9733 72, reason for payment: Junior Byles. We’ll make sure that he receives every Euro, Dollar or Pound reaching us in his name!